Written by Admin Published on February 20, 2022 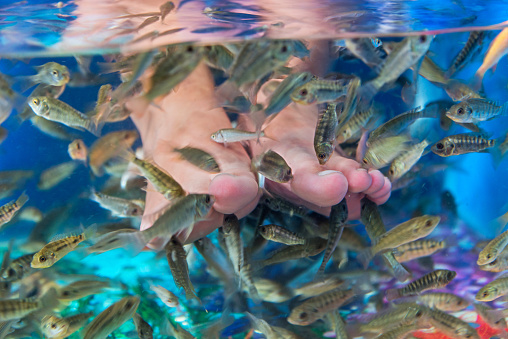 Fish Pedicure is very popular in Turkey, their home country, as well as in other Middle Eastern countries. A native of the Middle East and Southeast Asia, the Garra rufa fish are found in the region. Fish may allow in certain parts of the US.

A popular reason for its popularity is that the fish can exfoliate and soften the feet in a pain-free manner. It tickles but do not hurt.

Nonetheless, these pedicures are not just harmful, but also damaging to the environment. This is why they are actually banned in many US states and parts of Canada and Europe.

What actually is Fish Pedicure:

The service involves immersing the feet in a tub of water containing small fish called Garra Rufa for the duration of a fish pedicure. It is sometimes called “doctor fish” because it consumes dead skin from people’s feet, revealing newer skin beneath.

Traditionally, Garra rufa is used as a medicinal treatment for people with psoriasis, a skin disease.

Pros and Cons of Fish Pedicure:

According to fish pedicures, they also exfoliate rough patches and reduce calluses on the feet.

There are more risks associated with fish pedicures. Treatment with ichthyotherapy or Garra Rufa reduces psoriasis by 72%. However, The other treatments can also do this without risks.

It is prohibit in these places:

At least 14 states have prohibited fish pedicures, including:

Additionally, they are banned in parts of Mexico, Europe, and Canada.

Safety measures of this type of pedicure:

Various states have the authority to prohibit fish pedicures.

Reasons for the bans include the following: