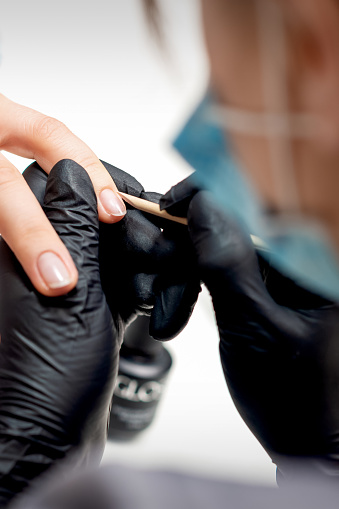 Along the bottom edge of your finger or toe lies the cuticle, a layer of clear skin. That area is known as the nail bed. Normally, nails grow out of the nail root through the cuticle, which protects them from bacteria.

Cuticles are delicate. They can dry out, damage, and become infected. Maintaining your nails properly means keeping the entire nail area clean so they don’t become infected. The cuticle skin is removed when you push back cuticles and the proximal fold is pushed further back. It is common to refer to the cuticle and proximal fold collectively as “The Cuticle” in the nail world.

Push back cuticle with cuticle pusher

If you need to push your cuticles, use a wooden cuticle pusher. This will be less damaging to your nail plate.

Using a nail file, you can buff the area of nails near the cuticle area in order to ensure that all of the dead cuticle tissue has been removed.

Do not use excessive force or cut the cuticle if the natural method does not work. If you prefer, you can use any cuticle remover from a reliable brand. Your cuticles should always be treated gently.

Apply Cuticle Removers to push back them:

A Cuticle Remover is a special chemical that softens your cuticles and dissolves dead cuticle skin.

Dead cuticle tissue that sticks out excessively can be removed with this method. Since you haven’t tended to your cuticles in a while and they have grown over, I recommend using a cuticle remover.

Get rid of cuticles without any tool:

You can use a toothpick and a match stick to push back cuticles if you don’t have a cuticle pusher.

For the first 5 minutes, soak your fingers in hot, soapy water.

Apply some oil or cream to your cuticles afterwards.

Next, gently push back cuticles using the plain end of the matchstick.

The toothpick can be used to scrape away any dead cuticle tissue left on the nail plate once the cuticle is pushed back.

When and how often remove cuticles:

Keep your cuticles neat and tidy by pushing them back every week.

Or push them back while applying any nail product, such as nail polish or acrylic nails.

In general, there are only two types of people whose cuticles need to be removed.

Rather than pushing your cuticles back to a set length, push them as far back as you are comfortable.